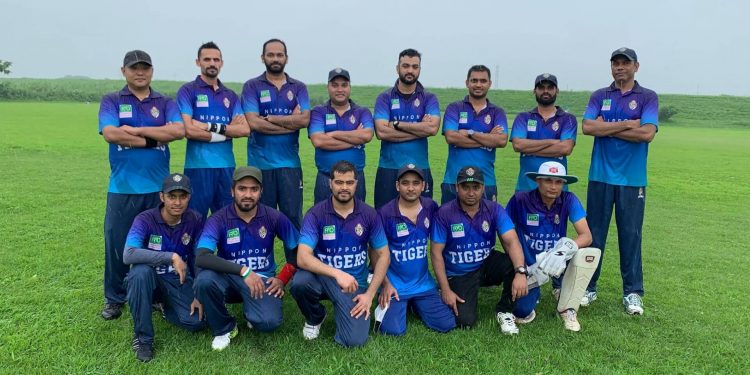 Rain no Rain both team wanted a game.

This weekend like the last one, had a threat looming over the possibility of a full match. Tokyo Rangers Cricket club formerly known as Nippon Tigers are the new entrants in Japan Cricket league division 2, 3 and East Kanto group. Last week, the div 2 game against Paddys was a washout so this game could be their first competitive 40 over the game. MIB, the other team is playing competition from a few years now. Both teams arrived at the ground way too early ( 2 hours at least) in anticipation of a game. After a bit of a work put in by both the team members, ground even though a bit wet, Umpires (ADORE CC) judged it okay for a full 40 over match. Finally, Rangers will be playing their full first 40 over the game in Japan Cricket League.

Under the wet and overcast conditions, MIB captain, Ramesh Paturi won the toss and decided to bat. hmmm. Rangers Skipper Solaiman opened the bowling with Haider shah. Both bowling in good channel did not let MIB to a freely open their arms. First 7 overs, MIB could score 17 runs only. Rangers captain decided to change the opening bowlers and brought gentle left-arm spin of Abhishek and medium-pace of Qasim; wickets started to fall. Abhishek in his first over provided the breakthrough by trapping Anil Kumar LBW for 2 (22). Akash Shastri 11(29) and Anish Shekhar 0(4) did not last long to reduce MIB to 3/20 in 10 overs

Batting was under pressure to deliver. Middle-order failed to apply themselves at the wicket. Abhishek with his magic deliveries ended up with 4 wickets in his first spell. Rangers had their presence in fielding too. When MIB captain looked for a not so risky run, a long accurate throw from Shazid saw him short of the ground. The fact that the first boundary was scored in 22 over. At 9 down, Abhishek was brought back into the attack to look for his first 5 wicket haul. He trapped Samrat Karki LBW, on the 3rd ball of the over to get his name on the Sano1 honours board. (if there is any ). Whole Rangers team felt ecstatic. It’s a commendable performance against a very good experienced side.

Check out this outstanding performances honourable mentions in stats and record page.

In the end, MIB could score 59 runs in 23.3 overs which included 23 extras. MIB is a good team. The only reason for this lacklustre performance could be a lack of training and match practice.

Now, It’s an opportunity for Rangers to earn a well-deserved win and with a bonus point. The Rangers openers Md Abdullah Al Saki and Ajay Kumar Thakur started aggressively. Ajay 22(49)4sx2, 6sx1, did not spare loose balls and Saki 10(27) anchored the innings. When needed 6 to win, Ajay got out. In the end, Saki and veteran Naeem 5(2) 4sx1 batting at number 3, guided team to victory in 13.1 overs. Ranger won the game with 9 wickets in hand, and 26 overs to spare and with a bonus point. A bonus point will be very handy for them in the later stage of the game.

To sum up , TOKYO RANGER team outplayed team in all departments and other teams will take a note of this.

In the first 2 weeks of the tournament, most of the games are dominated by strong bowling display and batsman are yet to find the rhythm. The weather forecast for 18th and 19th July is not optimistic. Let’s hope weather become favourable for the play for a good weekend of cricket.