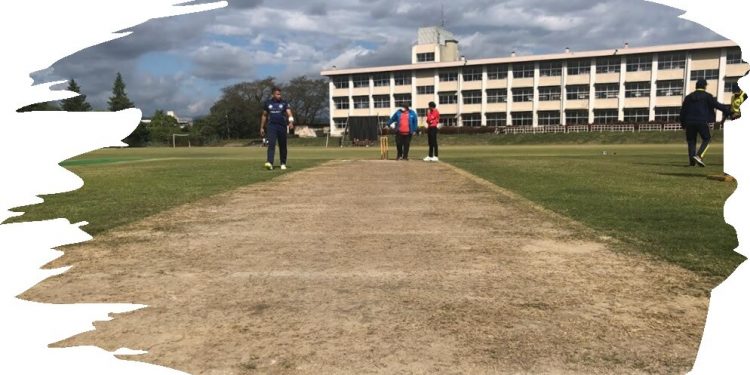 The overall experience of Cricket for players and viewers in Japan has improved a multifold since the opening of Sano International Cricket Ground. Along with a lot of amenities, there is an indoor training facility, practice wickets, quality outfield, and yes “Turf Wicket” curated for important events such as JPL, Embassy cup, and JCL grand finals.
Since few years, the Japan Cricket Association is doing every bit in facilitating players to experience the turf wickets. However, like every season, weather conditions, washouts impedes the opportunities to avail its use.

The other venues such as Sano1, 2, 3, 4, in Sano City of Cricket and Fuji 1 , 2 in Shizuoka have all synthetic wickets where 90% matches of the season are played.

When batting first on Turf, Pitch fear is additional factor in batsman mind.

As a player, there is no greater enjoyment than playing on a good turf wicket. For any cricket match, discussion revolves more around the nature of Turf wicket. Its behaviour change over period of time makes games interesting and appealing. So far, division 1 teams have got opportunities to play 1 or 2 matches on turf wicket each season.

By playing often, Teams will understand loopholes in techniques, combination, strategies. It will prepare themselves better for playoffs. Lot more games could be possible, if Turf wicket is available at start of the season. A true wicket that provides consistent bounce, assist spin and holds well for 100 over is a tough job for groundman.

On synthetic wicket, bowlers need to work harder to get wickets as the bounce is even. But on a turf wicket, the bowler can rely on the uneven bounce and it becomes a potent weapon. An additional spinner will often find a place in the team based on the nature of turf wicket. It’s often the condition of the wicket that drives the results rather than the skills of the bowlers. Bowlers who have various delivery options pose more threats. On the other side, fast bowlers & spinners need to find their length as quickly as possible to get help from the wicket. A flat hard wicket would be more unforgiving than a synthetic wicket where the ball comes much nicer on to the bat.

Adaptation as a Batsman

On a synthetic wicket, a batsman can come in and can score 20s-40s consistently as the bounce is true. But on a Turf wicket to succeed, a batsman needs to adapt consistently to conditions, nature of bounce in addition to the challenges thrown by bowlers. It exposes batsman’s skills, weakness, ability to adapting to situations, ability to use feet, shot selection, get on the front foot, and how consistently he gets behind the ball. A batsman with the ability to rotate strike and patience to stay at the wicket is more valued over hitters. An allrounder who has contributed partly in batting and bowling every game might find it difficult to get a place in the team to accommodate spinner. (another topic of debate)

How much impact Turf wicket has on semifinals and Finals?

Based on the Semifinal outcomes this season, there is huge impact on results. Division 1 Semi-final played on turf wicket had one sided affair.

In the 1st Semifinal between MAX vs AQCC, Max batting first, top order failed miserably to adapt. Scorecard read 8/3 (4.5 overs). It soon became 31/5 and 78/10 in 24 overs. MAX paid the penalty of not being attentive to the wicket and conditions, swing, and low bounce of the wicket. Low bounce favored bowler considerably. In reply, AQCC chased down a partly target of 79 runs in 16 overs. Thanks to the 50+ opening partnership and wayward bowling.

In the 2nd Semi-final game between Tigers vs Falcons, Tigers, Batting first had a similar setback. 20/3 (4.6 overs) but a sensible 60 run partnership brought them back in the game. Finally, Tigers could post 152 runs in 36.5 overs. Falcons had a disastrous start at 9/4 ( 5.5 overs). The team could not recover and were all out for 85 runs.

If semifinal matches were played on synthetic wickets, matches might have been much closer.

Is it meaningful to play on Turf for playoffs? 90% of the games played are on Synthetic wickets?

It’s arguable but the answer to the questions surprisingly Yes it is meaningful but it is based on few considerations. Firstly, the wicket must be good and should have a true consistent bounce. Secondly, should hold well for over 80 over and should not deteriorate considerably after 40 overs where one team will gain a considerable advantage of bowlers’ footmarks and should not look like day 4-5 of a test match. On synthetic wickets, the average run rate is between 4~6.(160~250runs/ 40 overs ) . Highest this season being 388 runs in div 2 game at SICG1 ground.

Playing on the turf wicket, teams and players would need to

We have often seen in the international games that middle and lower order finds it difficult to score and bowling teams gets opportunity to come back in game with every wicket. In Japan Premier League T20 was disrupted by heavy rain and moist wicket. Teams that did well to adapt performed and won.

In Embassy cup T20, Final game between Pakistan stars vs Japan, Pak stars bowled 5 spinners and Japan team had no answers to that.. If this game was played on Synthetic wicket

I the other game between Indian Embassy and Sri Lankan embassy, IND embassy top order built a solid partnerships and allowed middle order to express freely and posted highest total of 173/4 in 20 over in Embassy Cup this season.

On 7th & 8th Nov, we will witness grand final of Japan Cricket League Division 1,2,3. Two well balanced Teams shall face each other for the final time this season. Groundman Yoshi Uehara and team at SICG are doing tremendous job to curate and create quality Turf wickets for the final one day games. ( Ground report here). If we get to see a much better wicket which offers Good consistent bounce for the finals & If weather conditions stay sunny, clear over the next few days, then we have exciting match on our hands.