This is first Major title for KKR in its first year of inception.

KKR defeated Tokyo Rhinos by 6 wickets to win SANO 40 tournament. This is KKR team first trophy in 40 over game format. RHINOS batting first, posted 119 runs. KKR should thank bowling attack of Manish Kumar and Updesh Bhadoriya who shared first 5 wickets to reduce Rhinos for 29/5 in first 10 overs. There was a stage of recovery when Bikashjung KC (12) and Abhishek Khattri Chhetri (18) formed a partnership of 48 runs. In 16th over, when Raman Tanwar took 6th wicket, RHINOS did not recover and in the end, RHINOS were all out on 119 runs. Biggest contributors were the 41 extras conceded by KKR.

Naveen Gaur started the chase towards a win in an emphatic fashion with cracking square cut boundary off the first ball. His displayed fluency and power in entertaining 23 runs (4×5). Match took an interesting turn when KKR were 54/4 and still needing 63 runs to win. But Updesh Bhadoria 37(59) and Raman Tanwar 31(31) batted patiently chase down in 21st over.

KKR is the new club (old wine in a new a bottle) of 2020 season eyeing spot in JCL league. After the celebrations, teams quickly packed up and moved to Tokyo to play Tokyo Night cricket Championship. 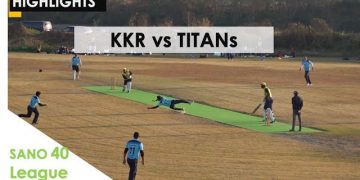 Cricket NO BALL- Get to know 24 types of NO BALL in Cricket for better knowledge & save runs.