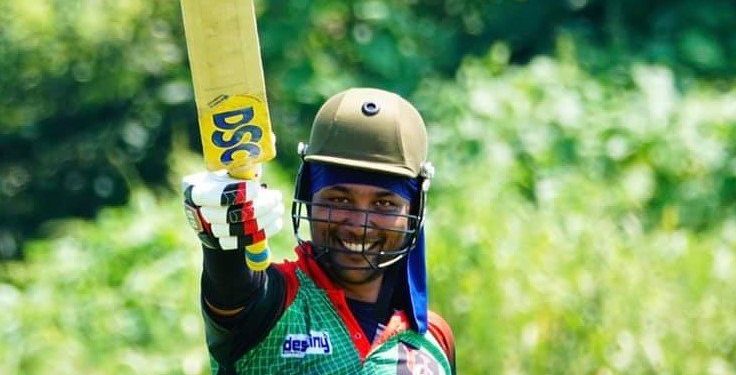 Sayeed Shoban scored 2 quickfire 50s, 50runs of 15 balls in the first game against Tokyo rangers and 51 of 17 balls in 2nd game against MIB on a single day in Japan cup T20 game played at Sano 4 ground. 15 ball 50 could be the fastest in the history of the competition. and certainly in top 3. What makes these 50 so special is that these were scored when chasing a total under pressure. To keep wickets in both innings and later on to come out and bat like this is a true display of determination to win matches for your team. Sarfaraz Petkar from MIB continued his good form and luck to score a blistering 39 balls 100 against Rising stars which contain 11x6s and 6x4s. MIB posted 187 in 20 overs. Thanks to Sayeed and later on by Abu, match was still in their grasp till the penultimate ball. In the end, MIB hanged on to the thread to win by 6 runs.

15 ball 50 by Sayeed Shoban could be the fastest in the history of the competition.

In the other T20 game played at Akishima, thanks to Shees ram of Kawasaki Strikers who scored 73 to post a challenging total of 182 for University XI. Uni Xi could score 108/6 in 20 overs.

CRICJP is compiling a list of records, interesting facts and figures. Based on that the previous record of fastest 50 and 100 in Japan Cup is in 16 and 49 balls respectively. As other match performances verification in progress to verify the stats. Records page will soon be updated with old stats and records. Check out 2020 season stats page here.

On SICG 1, In a division 1 game between Sharks and Falcons, Chiba sharks batting unit found form and captain Dugal Bedingfield led from the front with well-timed 82 runs of 63 balls well supported by Markus Thurgate who scored 59 runs of 79 balls and later on Neel Date 52 runs of 44 balls. At the end of 40 overs, SHARKS posted a very competitive total of 268/5. Somebody from Falcons had to bat out of their skins to chase that target but Falcon batsmen never found to be in the game and kept losing wickets regularly. In 21.3 overs, they were all out for 148 runs. Sharks won by the massive margin of 120runs and maybe with a bonus point.

On SICG 2, Division 2 game was played between AQCC and Wyverns XI. AQCC 2nd XI had a ridiculously strong team as players from XI joined to bolster 2nd XI. They bundled Wyverns team for partly 66 runs in 18.4 overs. Raman Tanwar and Yusri took 3 and 4 wickets respectively. Later on, fresh from a 50 in division1, Vinay Iyer scored 55*runs of 27 balls. They chased down the total in 6.3 overs without losing a single wicket which might again be a record. As per the JCL rules, a player is not eligible to able to play the next Division 1 game if he plays in other division of JCL so for AQCC so it will be interesting to see an opening combination of batting and bowling for the next game.

AQCC and Falcon faced each other in Division 3 game at Sano 3 ground. Falcons batting first, posted 151 runs in 36.3 overs. This game was headed for dramatic finish however dropped catches and heat took the tool on AQCC and finally, Falcons chased it down the target by losing 8 wickets and 8 balls to spare. Bowlers dominated this game with 3 and 4 wickets haul. Prathick Kulothungan from AQCC bowled well at the start of the inning with 8-0-33-4 and Vikram continued to add wickets to his tally with a spell of 8-0-30-3 in this game. Deepak Sinhmar from Falcons had a good outing with the ball with a spell of 8-0-29-4 to restrict to AQCC to 151.

Apart from the battle between bat and ball, players had to weather blistering heat and humidity.